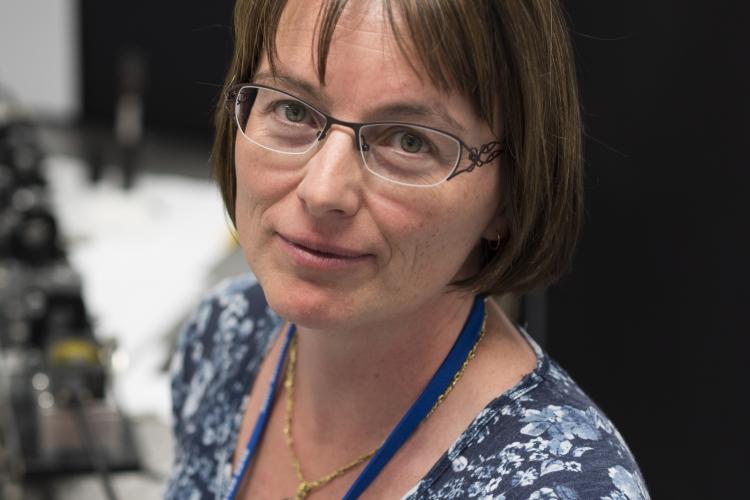 Céline d’Orgeville joined the ANU Research School of Astronomy and Astrophysics in 2012 to lead Laser Guide Star (LGS) activities undertaken at the Advanced Instrumentation and Technology Centre (AITC) on Mount Stromlo near Canberra. Céline is the AAO-Stromlo Laser Guide Star Adaptive Optics (LGS AO) Group Manager, and the AITC Education Programme Lead. She is also one of two inaugural recipients of an ANU Translational Fellowship aiming to transfer her semiconductor guidestar laser research into the commercial world.

Before ANU, Céline worked at the Gemini Observatory where she led the multi-million dollar Gemini laser program, including the design, fabrication and commissioning of the Gemini North and South LGS facilities in Hawaii (1999-2006) and Chile (2007-2011). The Gemini South Multi-Conjugate AO system, GeMS, uses five sodium LGS to probe the atmospheric turbulence above the Gemini South 8-meter telescope. Céline’s GeMS LGS Facility has held the record for most sodium guide stars in a LGS asterism since its commissioning in 2011.

Céline was the inaugural chair of the ANU Research School of Astronomy and Astrophysics (RSAA) Access and Equity Committee created in 2013. With Nobel Laureate Prof. Brian Schmidt (now ANU Vice-Chancellor) she co-chaired the 2014 edition of the Women in Astronomy workshop. She has been a steering committee member of the Astronomical Society of Australia Women in Astronomy (WiA) Chapter, which broadened its remit to become the Inclusion Diversity Equity in Astronomy (IDEA) Chapter in 2016. Céline is also an ANU Ally and a member of the ANU Gender Institute (GI) management committee.

Space junk: What is it, how much is out there, and what should we do with it? (ABC News interview)